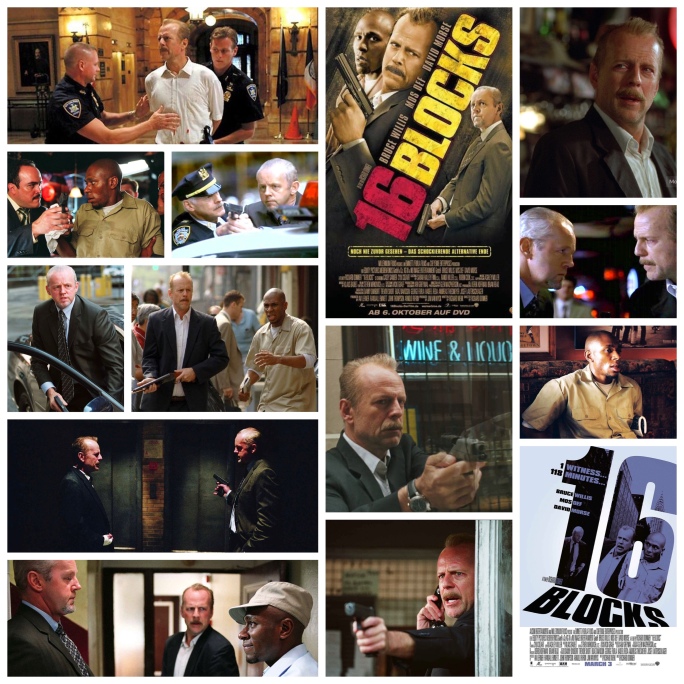 Bruce Willis is the type of action hero who is never idealistic, chipper, optimistic or overtly upbeat. There’s always a sarcastic reluctance whenever he gets pulled into a gunfight, hostage situation or standoff and I think that’s the quality that has made him such an endearing star presence. In Richard Donner’s 16 Blocks he plays an NYC Detective named Jack Mosley, who is a burnt out, sardonic alcoholic who couldn’t give a shit about his job anymore, let alone the motor mouthed convict (Mos Def) he’s assigned to escort the titular distance to testify against some mob bigwig. Jack can almost be seen as the same Willis character we’ve been watching our whole lives but after all the others, a progression that has lead to this one portrayal where the archetype has just reached the end of his rope. It’s a wonderful performance from him and a strong, solid suspense thriller. Def’s character is an annoying, fast talking hustler who we just want to deck right in the face, but I suppose that’s kind of the point of him here so we can see Jack’s tolerance boil over and eventually warm up to the guy. There are forces aligning against them though, factions on both sides of the law that have stock in Def not making it those 16 blocks with his pulse still going, and Jack must dust off his old reflexes to take on what appears to be the entire New York City police force, along with a fellow detective and old friend who has gone rogue, played with affable menace by the always awesome David Morse. This is a terrific thriller with well drawn, relatable characters stuck in one shit show of a situation, it’s minimalist without being too low key and fired up without being overblown or silly. The photography by Glen McPherson makes great use of looming NYC architecture, narrow streets and artifices that could get shattered by a rain of bullets any second, and the exciting score by Klaus Badelt sets a nervous mood of urban menace while introducing Willis with a melancholy twang. This was Donner’s last film before going on apparently permanent hiatus and I’m not sure why, I’ve always loved his work and would love to see a comeback. Willis gets a lot of hype for guys like John McClane and Butch Coolidge who are definitely legends, but Jack Mosley is one of his best creations, a hard bitten boozer with a compassionate lining under the scruff and a brutal resilience in the face of overwhelming odds, it’s his version of Eastwood’s Ben Shockley in The Gauntlet and an underrated character in his canon. Great film.