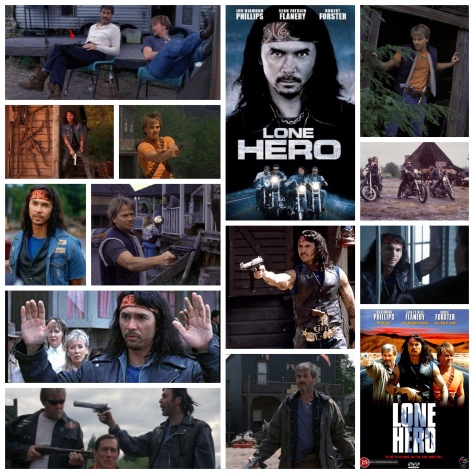 Lou Diamond Phillips is an actor who’s never really impressed me much, except for this one. Lone Hero sees him headline a low key action B flick and steal the show as Bart, a nasty biker gang chief who rolls into a tiny Montana town with his boys, looking for nothing but violence and trouble. Here’s the cool thing about his performance: while many actors who have played evil bikers tried out the straight up savage, hotheaded route (which admittedly works if done right), Lou switches it up and plays the guy as a calm, free spirited scoundrel who although is an indefensibly scummy fellow, does it with a gleam in his eye and smile on his face. That’s a courageous choice for a villain role of this ilk, but it’s a great fit for him and his best work I’ve seen. Because this town oddly doesn’t seem to have any cops let alone a local Sheriff, it’s up to a few plucky locals to fight off the biker menace and take back their town. Sean Patrick Flanery plays a guy who isn’t necessarily a western cowboy hero, but plays one in a local tourist attraction and therefore must step up to the plate, and in a place as bereft of law enforcement as this burg, that’s what they’ll have to settle for. He’s joined by the great Robert Forster as an ageing frontier man who grabs his trusty rifle and starts blasting bikers all to hell alongside Flanery when things get rough. This is TV movie territory and nothing of consequence really jumps out at you, but the three actors make it a damn good little show, the banter between the them is genuinely fun stuff and acted well by all. Oh and like I said, Phillips makes it a Diamond of a performance, a true scene stealing villain in the spiritual energy of someone like Robert Downey Jr, I’d love to hear if anyone can think of a role he’s been better in. Good stuff.