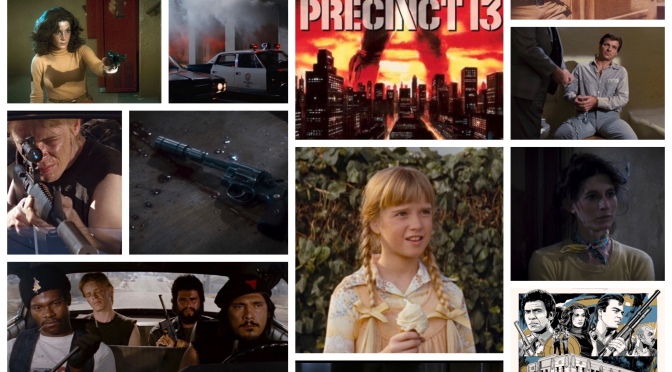 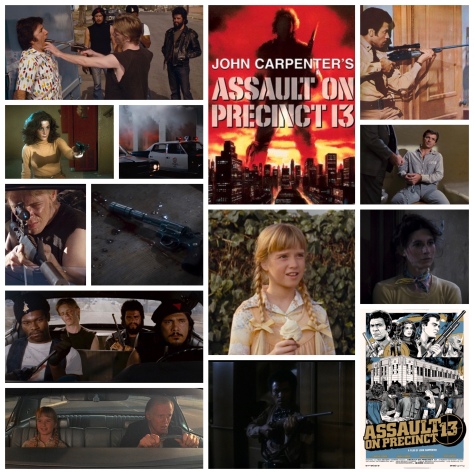 What makes John Carpenter such an incredible filmmaker? Many things, but one skill he has is being able to make a terrific story come alive whether he has a huge budget or not, whether it’s a giant high concept story, or a lean, mean, minimalist chamber piece. With Assault On Precinct 13 he’s got a few guns, a few cars, a few actors and one derelict police station, and the result, although not among his best work, is one nasty little urban exploitation feature that entertains and packs a bloody, visceral punch. The premise is gloriously simple: Several spectral, inhuman gang members chase a witness into an almost shut down precinct with intentions on killing everyone inside. One intrepid Deputy (Austin Stoker), a mysterious career criminal (Darwin Joston), a plucky secretary (Laurie Zimmer) and others are all that stands between these marauders and all out warfare. It’s a siege flick, a cop flick and an action picture all in one and works because of how low key it all is. The assault on the building itself is showcase low budget cinema and really well done as multiple silenced weapons shred through the doors and windows, but my favourite sequence is an earlier one in the film. As the gang prowls the desolated, decayed LA streets looking for suitable vehicles to hijack, a lone ice cream truck driver (Peter Bruni) finds himself right in the crosshairs of these heavily armed psychos. Then as if that isn’t bad enough, a little girl wanders up to purchase a frozen treat and, non discriminately, is gunned down in cold blood. It’s a shocking scene on its own just for the fact that Carpenter had the balls to do it and in fact on Robert Rodriguez’s Director’s Chair interview he said that he probably wouldn’t have gone that far had he made the film these days. What’s worse for me is that the girl is played by Kim Richards who starred as Tia Malone in Disney’s Escape To Witch Mountain, a film I grew up with and saw hundreds of times as a kid, so thanks John for ruining my childhood with that. Jokes aside it’s a galvanizing scene from beginning to end and even if there are way better Carpenter flicks out there overall, it’s probably one of the best sequences he’s directed in an otherwise solid pulpy action flick. Gotta mention Carpenter’s original score too which, as per usual, is brilliant.

Assault On Precinct 13 is less of a remake of John Carpenter’s balls out, guerilla action treatise and more of a branch off into timeless, near western archetypes, as well as the good old siege thriller format. It’s also one of the meanest, grittiest cop films of the last few decades, deserving a higher rung on the ladder of adoration than it has so far ascended to. Dark, merciless and full of yuletide gallows humour, it’s a searing blast of gunfire and snowbound pulp starring a roster of fired up talent, starting with an intense Ethan Hawke and an unpredictable, predatory Laurence Fishburne. Fishburne is Marion Bishop, a legendary criminal kingpin wrapped tight in police custody and shipped off to a remote precinct on New Years eve with a busload of fellow prisoner transports. The station is run by a few relaxed cops, all preparing to punch that clock and get the New Year’s festivities underway. Unfortunately, a gang of corrupt detectives have other ideas, descending upon the ill guarded outpost with the fury and firepower of animals set loose, determined to murder everyone inside and level the place to the ground in order to cover up their actions. Hawke is the veteran cop with a dodgy undercover past, blessed with the grit and gristle necessary to rally the troupes and self preserve til the morning light. Drea De Matteo, who’s awesome and welcome in anything, is a tough female sergeant, Maria Bello the sharp police psychiatrist caught in the middle, Brian Dennehy the salty old dog, and a laundrey list of rabid felons who pitch in to save their own asses, including Ja Rule, Aisha Hinds, Currie Graham and a wired up John Leguizamo. Together they all make a veritable wild bunch to hold down the fort, but the forces they’re up against are tactical and terrifying. The opposition is headed up by a dangerously quiet Gabriel Byrne as deeply a corrupt Police Captain, doing a coiled viper rendition of a Christopher Walken villain, his work one of the strongest aspects of the film. Watch for Matt Craven and Kim Coates in brief cameos as well. The action is a ballistic blitzkrieg of firefights, standoffs and ditch efforts, scarcely giving the audience time to breathe, let alone tally up the casualties, of which there are many. This ain’t no cakewalk, in terms of action films. It’s down, dirty and has no time for quips, smart mouths or villains that monologue. Everyone involved in a caged animal prepared to go to extremes at the drop of a hat in order to achieve their goals, with kneejerk reactions and off the cuff violence that feels real, and cuts deep. If you are serious about your action films, and enjoy ruthless, non patronizing narratives that get as cold as the snow drifts surrounding the precinct and as casually indifferent as the bullets that ventilate it, this is your ticket.