There’s a lot of trash been talked about the Alien Vs Predator films and.. yeah, I’m not going to argue, they’re not the greatest thing in the universe, let alone the canon. But at least the second film, given the appropriate subheading Requiem, had the decency to actually be R rated and go for broke with gore, violence and ooze as we are accustomed to from each respective franchise and, as dutiful fans, no doubt deserve. While the first film was a lore-heavy, multidimensional Antarctic set SciFi horror with a ton of exposition, this one ditches all of that for a lush Canadian Pacific Northwest setting and a very thinly plotted slasher aesthetic wherein the residents of a quiet Vancouver suburb encounter both species when a predator research spacecraft carrying a bunch of alien face-huggers crash lands nearby. I won’t go too much into detail regarding the characters because they are just beyond cliched. Hot dumb blonde dating the asshole jock, underdog pizza delivery boy hopelessly in love with her, cue violent altercations blah blah who honestly cares, the writers literally put less than no effort into that arena. Tough guy town sheriff (John Ortiz) rallying the troops to fight these beasties and a mysterious army colonel (Robert Joy, adding the film’s only recognizable horror pedigree as far as cast goes) who has some egregious agenda connected to the Yutani corporation. Much of the film is shot in dim or dark settings like the first, so the action isn’t always discernible or legible, but there are a whole parade of Xenomorphs just crawling all over the place which is fun. One way this one succeeds is in its gruesome viciousness; the gore, kills, splatter and deaths here are an absolutely spectacular array of surprisingly nasty (we see kids and a pregnant mother in a hospital butchered by the marauding Aliens) set pieces and carnage, and when it comes time for the two species to have their WWE Smackdown the series of fights between them are brutal and not disappointing. The film has zero mythology and strips down all of that world building for a simple tale of one Canadian town being decimated by these two warring species as they beat each other senseless, and that’s pretty much it. I didn’t hate this film, and I didn’t love it but I sure as hell admired its willingness to go full on hard R like these franchises were always meant to be, unlike its pansy ass predecessor. And one more thing: this is the only film on record in either canon to feature an Alien/Predator crossbreed creature that seems to show up out of nowhere, and while that probably just means it was created in a lab by the Predator species who appear to be busy bees as far as experimentation goes here, I’d fondly like to think that at some point two of them fucked and had gnarly acid-lubed intergalactic alien sexy time, and I’ll leave you with whatever lovely mental image that may conjure up. Good bloody fun.

Here’s the thing: much of what is needed was in place to make an epic, badass Alien/Predator crossover flick. They had a solid premise, a director with a sure footing and visible background in horror, an able cast with a genre/franchise titan as a callback to earlier entries, and all the special effects they could want at their disposal. So how did AVP: Alien Vs. Predator end up being an oven roasted, inexcusable slice of shit? Well, script and execution I suppose, the whole thing just has a murky, suspiciously rushed feel to it and no trace of memorable pedigree at all. However, to me their first mistake and cardinal sin was to rate the thing PG-13. These are two intense, extremely graphic and gruesomely violent horror franchises, and as such any amalgamation should, of anything, step up the carnage, so whoever had final say as far as that goes should have a face-hugger attached to every orifice of their body. So what does work? Well, Lance Henriksen for one, but he has a history of being the best thing about many films he’s been in and it’s hard for him not to shine through any amount of muck. He plays the dying CEO of infamous Weyland Yutani corporation and gives all the grit and gravity he can amongst a flurry of inconsequential CGI. Recruiting a team of scientists and mercenaries, he plans to descend into an Antarctic pyramid where centuries ago, the mythic Yautjas and the primal Xenomorphs had a Royal Rumble. Star Sanaa Lathan is actually great as the ‘final girl’ of sorts in this slasher game, other team members include Ewan Bremmer, Raoul Bova and Tommy Flanagan, but most are lost in the confusion, poorly written or forgotten entirely. The battle scenes are haphazard and sloppy, the dialogue barely there and the colour scheme is this kind of shitty, subdued blue-hue nonsense with no personality it’s own, like an icy deodorant commercial that just happens to have monsters in it. Many people blame director Anderson, but who really knows. People forget that he’s responsible for the first Resident Evil film which is solid, gutsy horror and has the type of energy meant to be found here, as well as Event Horizon, one of the scariest, well wrought sci-fi/horror flicks of the century, so he was a reasonable candidate to helm this. In any case, it’s a big ol’ mess, a titanic wasted opportunity and a dark stain on both respective legacies. There’s a sequel which I haven’t seen, but it’s probably just as wretched.

Regardless as to how one felt about PROMETHEUS, they would be lying if they told you the film didn’t have anything to say. The idea behind that film is so grand, it removes the viewer from the world of the xenomorphs because that picture is much larger in scope. Fast forward all these years later to ALIEN COVENANT to where not much is at stake, we’re given one-dimensional characters, and there isn’t much, if any, there there.

This time around our crew is built around a mopey Kathrine Waterston (a poor woman’s Ripley) who is in constant grief over the death of her husband played by James Franco in perhaps one of the most unnecessary cameos ever. An always solid Billy Crudup, Danny McBride in an admirable dramatic turn, and the saving grace of the picture is Michael Fassbender in dual roles as androids Walter and David.

Regrettably, the film doesn’t have much to say. Sure, there is some closure to the epic ending of PROMETHEUS, but even that arc of the film feels forced. It seems rather obvious that Scott abandoned any focus he had for a straight sequel to PROMETHEUS and did a swift pivot back to a clear cut Alien story. The problem is that the story is neither good or interesting. You know that most of the cast is going to die the same way they always do in these films and that the xenomorph will live on to continue to kill people.

What’s more, there’s no terror or suspense or horror built into the film. The overly CGI’d alien rips through people, viciously biting them and ripping them apart. Nothing is left off screen, the film is overly bloody and graphic in the most desensitized way. You can’t continuously beat the drum that movies use too much CGI and then embrace a film like ALIEN COVENANT. The film isn’t terrible, but it’s not good either. Upon the release of PROMETHEUS, Scott was asked about the future of the Alien franchise and his response was, “the beast is dead.” That may not be the case, but what’s for certain is that the franchise surely is on life support. 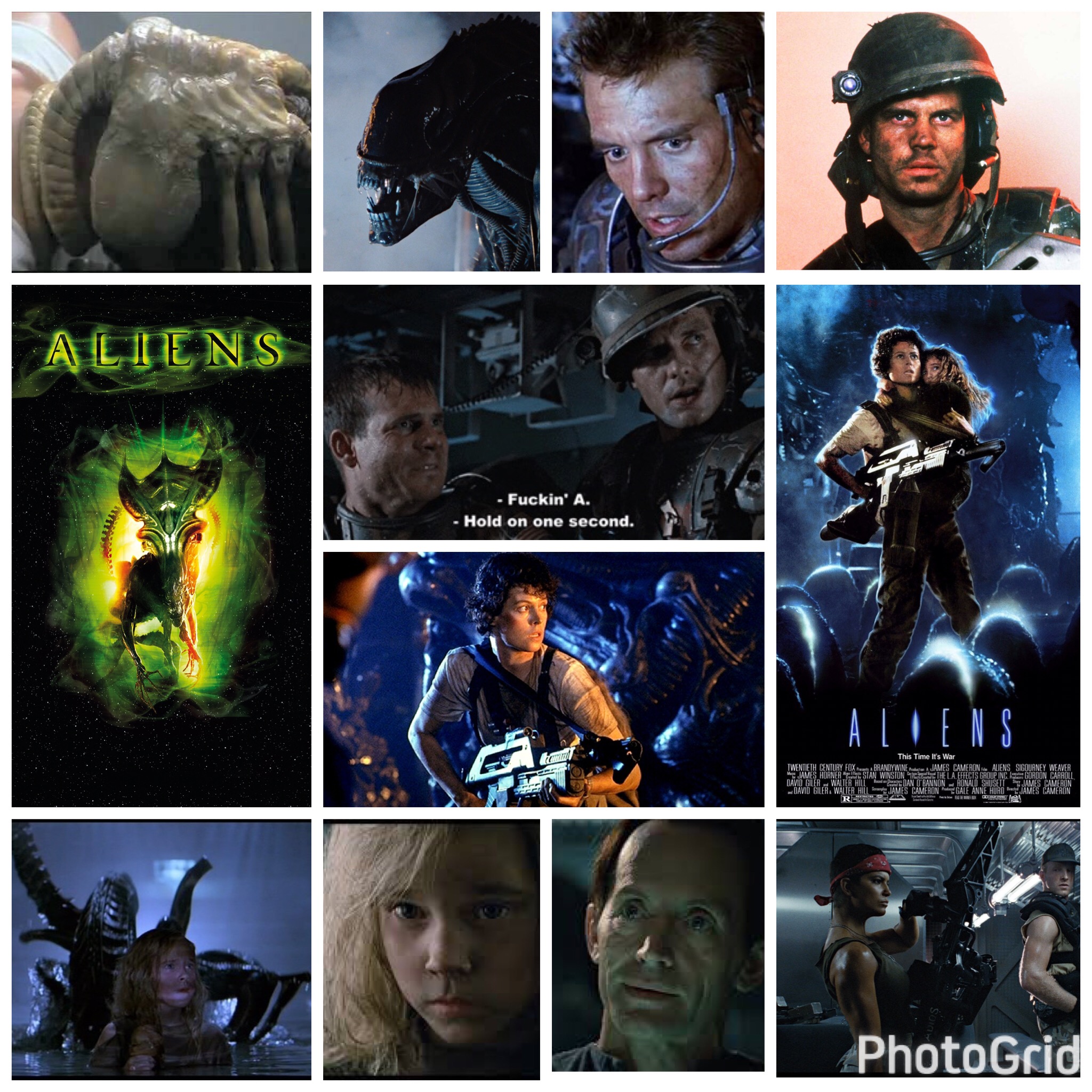 Each of the four Alien films has their own distinct and noticeable personalities. Ridley Scott’s original creeping horror show is a tense, streamlined, gracefully vicious film that slinks along at its own pace, not unlike the resident feline Jonesy who wondered about on the spaceship Nostromo back then. If Alien has the qualities of a cat, James Cameron’s Aliens has those of a rambunctious puppy dog, a rip snortin, go get em action backyard barbecue knockout that runs up and gives the audience a big wet slimy kiss. All animal metaphors aside (I’m running out of oh-so-clever ways to open my reviews, ok? Been at this shit for two years now), Cameron’s film is an undisputed classic, still jaw dropping to this day, even after what feels like hundreds of viewings, nostalgic yet fresh in different ways every time, and simply one of the best films ever made. It’s the gold standard for creature feature sci fi too, and while many argue whether or not it in fact outdid Scott’s original white knuckler, I can’t bring myself to be petty and pick favourites out of the quadrilogy, I love them all for a whole bunch of reasons. Aliens picks up quite a while after the catastrophic events of the first, with Ripley floating around in that cryo-pod for way too long, until she happens to cruise past earth, crossing the vision of the Weyland/Yutani corporation once again. Because they always make astute, well thought out choices, they decide to send a research team, accompanied by a very reluctant Ripley and a group of hoo-rah, bull in a China shop colonial marines to far off industrial exomoon LV-426, where they have lost communication with the settlers. After a brief, clammy build up, all hell breaks loose, and we get to see the full impressive extent of Cameron’s skill as a visual storyteller, as well as the oh-so-gooey, inspire practical effects work that brings those gorgeous Xenomorph beauties to snarling life. The cast is the epitome of badass, as we are constantly reminded of by Bill Paxton’s Hudson, the film’s resident squirrel who gets hilariously skittish when things get dicey (“game over, man!” Will never not out a big, Paxton sized grin on my face), but who heroically holds his own once he gets his sillies out. The other side of that coin is Corporal Dwayne Hicks (Michael Biehn, never slicker), cool as ice, shaken by nothing, including an atmosphere entry landing that would make Alfonso Cuaron pee himself, but doesn’t come close to disturbing Hick’s afternoon nap. Every Alien team must have an artificial human, some of which are trustworthy, and some not. Lance Henriksen’s Bishop is as solid as they come, never losing his head (despite being reduced to a puddle of spilt dairy product) and sticking by Ripley’s side until the bitter, hectic end. Ripley herself is a little older, a little wiser and a lot tougher, her intensity calcified into grit after losing her daughter, and given somewhat of a surrogate in the form of Newt (Carrie Henn) an orphaned child who has survived months living like a rodent in the air ducts. “They mostly come at night… mostly” she eerily warns Ripley. Oh boy, do they ever. LV-426 is positively teeming with them, and they show up to provide speaker shattering, pixel scattering action like only Cameron can do. The facehugger in the room sequence is still one of the most terrifying sequences in any film, and serves to make you hate Weyland weasel Burke (Paul Reiser) with that deep loathing reserved for the scummiest traitors in film. The final thirty minutes of the film are a showcase of action cinema, and it’s amazing to think they pulled off the Queen fight without any cgi back then, a slam-bang marvel of a climax that fires on a thousand cylinders, and to this day has never been topped. That goes for the film too. It’s *the* action sci-fi film, and as close to perfection as you can get.
-Nate Hill