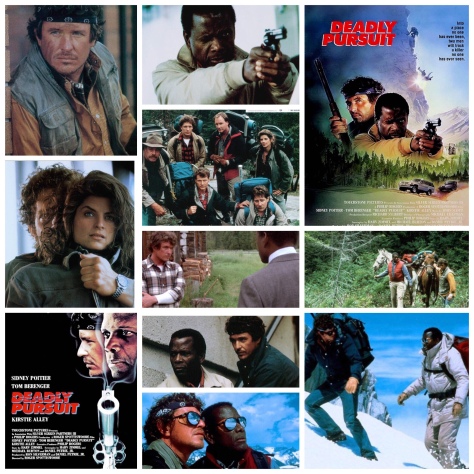 Shoot To Kill (aka Deadly Pursuit) is a spectacularly suspenseful, beautifully scenic thriller that knows how to stage action set pieces like nobody’s business. It’s also famous for the return of Sydney Poitier to acting after a near decade long hiatus, but that aside it’s just a crackling great film on its own. Part adventure, part chase flick, part psycho thriller, it could even serve as a nature documentary for all the breathtaking shots of Canadian Pacific Northwest wilderness. Poitier plays a big city cop who is on the trail of a homicidal, hellbent jewel thief who has covered his tracks by disappearing amongst a team of hikers venturing out into the mountains. Poitier is obligated to use the services of expert mountain man Tom Berenger to find the party before things inevitably get violent, and take down the maniac for good. He has his own stake in it as his girlfriend (Kirstie Alley) is the group’s guide. It’s a tense guessing game to see which one of the hikers eventually reveals himself as the killer, and since they’re all played by hard-cases like Richard Masur, Clancy Brown and Andy Robinson, it’s a gleeful toss up. Poitier and Berenger naturally butt heads, and it’s funny to see the straight city slicker and gruff outdoorsman archetypes clash. They pursue the killer up the Oregon belt and into the Cascade Mountains, eventually arriving in my hometown of Vancouver which actually gets to play itself for once instead of doubling for some yankee burg. This one holds up great and hasn’t lost a bit of its edge in the years since it came out. Tough, rugged, brutal but gorgeous piece of large scale thriller cinema. 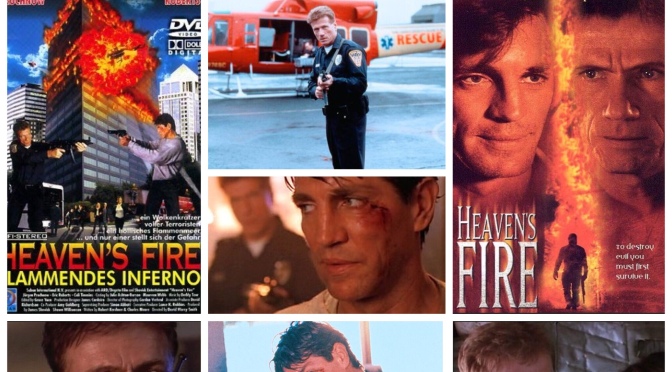 There’s an expression around the campfire of film criticism called ‘Die Hard clone’, a residual effect of how influential that movie was on the action genre. Although that term certainly applies to the terminally goofy Heaven’s Fire (that title tho), I resist the impulse to always trace films back to their inspiration as a negative connotation, and view every story as it’s own encapsulated adventure. Now that aside, this one is pretty shitty on it’s own terms, as you can probably tell by the almost deliberately shabby DVD art. It’s worth it for two reasons only, if you’re a fan of either: Eric Roberts and Jurgen Prochnow, two charismatic genre players who are always so much fun to see, even in Fisher Price knockoff crap like this. Prochnow, for like the tenth time in his career so far, plays a terrorist who seizes a high rise building, planning to hold the city ransom or blow it up. Roberts, that charming bastard, plays an off duty treasury agent who happens to be on a tour through the facility with his family and gets caught in the middle. You can guess where it goes. Gunfire, cringy one liners, standoff’s, inept hostage negotiations, all the tropes are present and accounted for. The script is so bad it almost seems like an SNL parody concocted by fifth grade guest writers, you almost can’t even hate the film because it reaches levels of absurdity that are, dare I say, *adorably* terrible. Eric and Jurgen ham it up in their own special way and if you enjoy their work (I’m something of a fanatic) it’s worth tracking down just to see the two legends side by side. Oh and like so many two bit flicks of this nature, Vancouver is the home-base for filming, which is always a plus no matter how shitty your movie is, because I get to take in the scenery and spot landmarks I pass by every day. Silly, silly stuff, and I’m pretty sure it’s rated PG13 too as there’s no swearing and all the violence is Grade school play level. 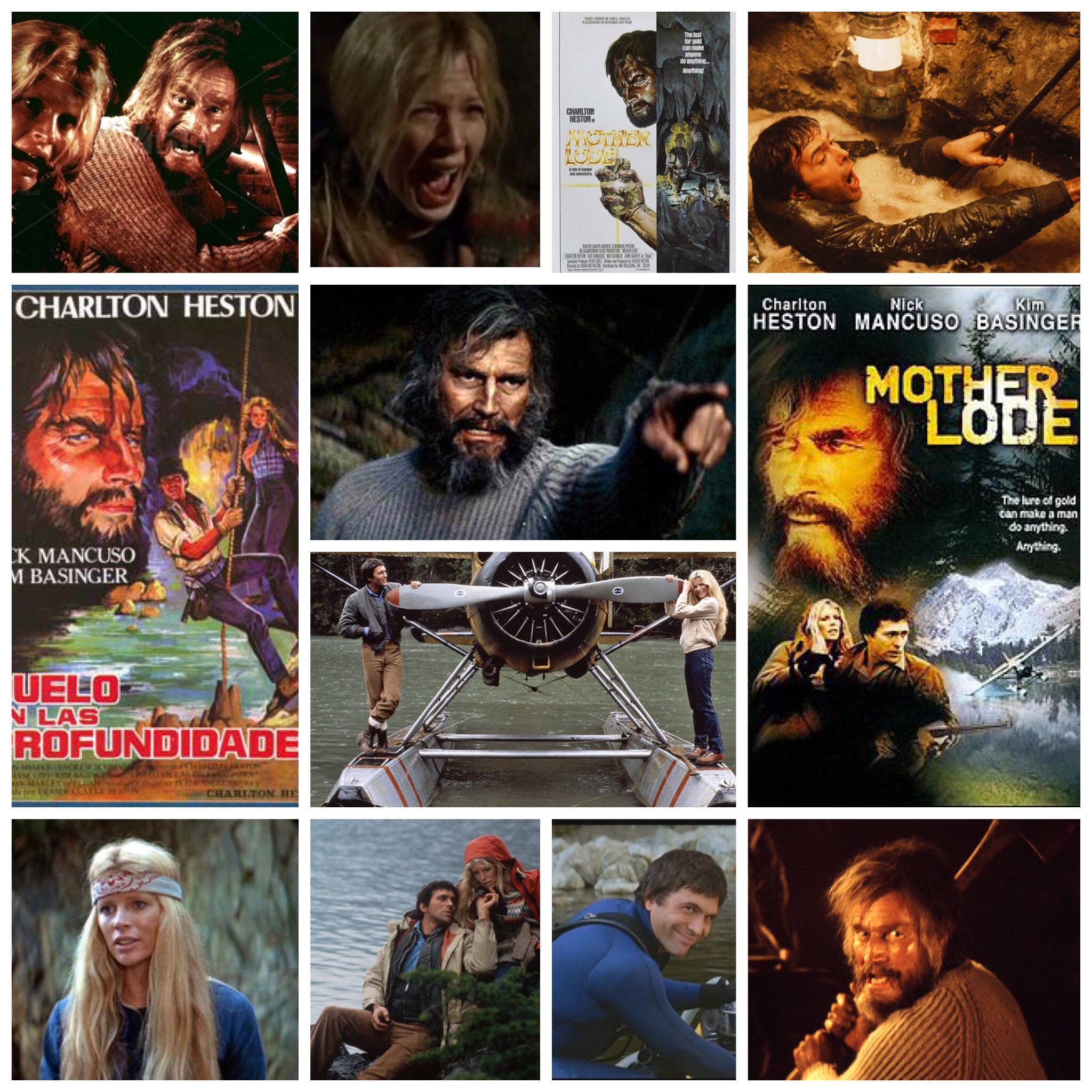 Charlton Heston’s Mother Lode is one of those neat flicks that not only is filmed in my hometown of Vancouver (like every movie ever) and the surrounding British Columbia region, but is also set there as well. It’s an entertaining, if slight little adventure story that’s perfect to put on for a rainy afternoon on the iPad. Heston, in addition to both writing and directing, plays two roles here, but it’s a bit of a sly trick saying that because he mostly appears as one, and only briefly as the other, but no matter, the old pro works his butt off to steal every scene. He plays loner mountain man Silas McGee, an eccentric prospector whose stairs don’t quite reach the attic, living alone in the wilderness looking for that perfect gold strike. The excellent Nick Mancuso, in a role originally meant for James Brolin, is Jean Dupre, a cocky bush pilot who heads McGee’s way with his high strung girlfriend (Kim Basinger), looking for a fellow pilot who got lost and a little of the gold stuff for himself while he’s at it. As soon as they run into McGee it’s clear the old dog is crazy as shit and not to be trusted, creating a nice atmosphere of isolated paranoia and mystery as the man’s true intentions come to dark light. Mancuso is always terrifically intense and so great at subtle comic moments, this is one of his great early roles and not to be missed for any fan. Poor Basinger suffered a miscarriage while production was underway and as such seems understandably distracted, but she’s a trooper and carries her end well. Heston either does a brilliant Scottish accent, a slipshod one or a bit of both, it’s hard to tell with his rapid fire banter and eloquent, robust verbosity. He’s electric though, and freaky as all hell as the type of dodgy fellow you better pray you don’t run into out there. The action is pretty run of the mill and the film loses the tautness a thriller like this should have in parts, but it’s solid enough to not change the channel. For B.C. residents it’s an absolute treat though, especially as Mancuso’s rickety float plane arcs up over the Vancouver harbour towards the Cassiar mountains and we get to see what our city looked like back in the 80’s. Cool stuff.

Big. Loud. Dumb. Hollow. Notorious train wreck and box office failure. Ballistic: Ecks Vs. Sever is all of these things, and yet somehow I still got a kick out of it, albeit in the shallow end of the speedometer. I know what you’re thinking.. “wow, another turd that Nate is polishing up with multiple syllable words to make it seem like less of a piece of shit.” Well, you’re not wrong. I fully concede that this is one huge glorious, post Mexican food pile of shit, but there’s something about it that pulls me in every time it shows up on SyFy or some such channel. Maybe it’s the fact that it’s one of those rare films that not only is shot in my hometown of Vancouver, but actually set here too. Mostly Vancity just doubles for Chicago, New York or any other Yankee metropolis, but director Kaos (yes that’s his name) chose to tell the story right here in my little burg. Speaking of story, or lack thereof, it’s one big shredded mess of a plot involving Ecks (Antonio Banderas) and Sever (Lucy Liu) two former federal agents out to get each other, eventually working together and then both becoming chumps in some ludicrous government conspiracy involving arch villain Gant (Gregg Henry, hammy as ever). It makes little to no sense, it’s so convoluted it prompts the viewer to throw their hands up in exhausted defeat and give up hope on any cohesion, instead letting a wave of shitty early 2000’s special effects and over elaborate, unwarranted stunt work to wash over them like a tidal wave of rejected video game cutscenes. And poor Vancouver, looking like a ghost town, just gets blown to fucking smithereens by these trigger happy, matrix wardrobed, scowling lunatics. I’d probably stay off the streets too if Lucy Liu massacring hordes of VPD officers was in the forecast, or on second thought maybe not, that sounds kind of hot. I’m rambling, but any review of this film has the right to get sidetracked and ramble as much as this pile of wanton sound and fury does for the entirety of its scant runtime. It’s disastrous to be sure, but does that stop me picking up the remote and switching over to something else when it’s on? Not really. Plus, despite the actual film, this has to have one of the coolest looking DVD cover posters ever designed. I mean, look at it. 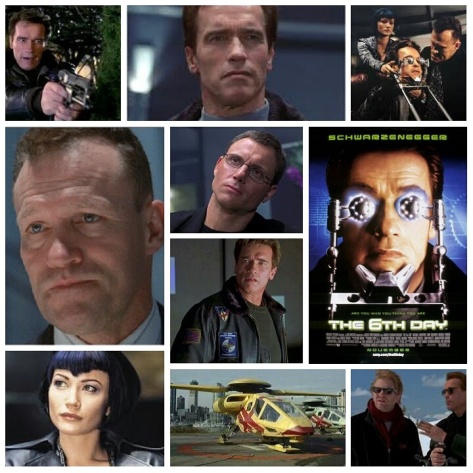 The 6th Day is a brash, in your face sci fi actioner with some deft scientific notions that it plays around with in near satirical fashion. It chooses to shoot most of its scenes in my hometown of Vancouver, including a set piece atop the spiral shaped Vancouver Public Library tat sends sparks raining down into the streets and choppers spinning wildly to their demise. I love when films shoot here, because it gives my city an exciting chance to be a part of escapism, and it’s amusing to watch them digitally maim all sorts of landmarks and then chuckle as I see them intact on my way to work the next day. Schwarzenegger, in one of his last great flicks before his deliberate hiatus (we shall not speak of the abomination that is Collateral Damage), plays Adam Gibson, a helicopter tour guide who has a strange blackout in mid flight while transporting the CEO of a swanky scientific corporation (slick Tony Goldwyn). He arrives back home to find a clone of himself living with his family, and things only get weirder from there. He has stumbled into the inner workings of extremely illegal experiments involving human replication, and Goldwyn & Co. are none too pleased about it. Goldwyn has secretly made human cloning an everyday thing for the company, hidden from the aging eyes of the moral upright doctor who founded the company (Robert Duvall). This is all enforced by a ruthless corporate thug for hire (Michael Rooker) and his foxy assistant (Sarah Wynter). Schwarzenegger is faced with the daunting task of taking down this un-sanctioned empire, reclaiming his family and blowing up some stuff along the way. It’s a terrific flick, and Arnie gets to say the best line he’s ever spoken, directed at Goldwyn, which I won’t spoil here but it’s pure gold. Goldwyn is hateable and malicious, the horrific third act prosthetics fitting him like a slimy glove. Duvall strikes a noble chord and almost seems to have wandered in from a more serious film. Rooker is intense, evil and scene stealing as always. Watch for Wendy Crewson, Michael Rapaport and Terry Crews as well. In a movie so committed to the trademark Ahnuld fireworks, it’s cool to get a whiff of actual thought provoking, Asimov-esque intrigue with the cloning, a concept which is fully utilized and really a lot of fun here.