ScienceWorld once did a colourful exhibition called Grossology, in which various parts of human anatomy are presented in garish, cartoony displays. The Farrelly Brother’s Osmosis Jones reminds me quite a bit of that, an inspired, juvenile little creation that seems to have slipped through the cracks. Focusing on the human body, or rather one human body in the form of out of shape, sloppy schmuck Bill Murray, it’s one of those rare half live action, half animated flicks, a concept which I love but one that only works out if you do it right. It worked magic in Who Framed Roger Rabbit, it train-wrecked in Rocky & Bullwinkle, and went more middle of the road in stuff like Cool World and The Pagemaster. Here it works pretty damn well, if a little better on the animated side, where most of the focus is put anyways. Murray is Frank, a walking disaster whose lifestyle reflects the culmination of the Farrelly’s career in terms of utmost vulgarity. Zooming inside his body, a sassy technicolor world emerges, sentient forces living in infrastructure not unlike our own, albeit peppered with so many delightful jokes, gags (some which will kick the reflex into action) and word-plays it’s hard to keep up. Chris Rock plays a lively white blood cell cop who responds when Frank eats a hard boiled egg that’s home to a deadly virus, and runs all about the City Of Frank chasing it down, joined by a robotic cherry flavoured Cold Pill (David Hyde Pierce). City Hall is Cerebellum Hall in the Brain, the bowels resemble skid row, Mafia bacteria thugs reside in the armpit, and you get the idea. The imagination runs wild here, if a little grotesque in areas. The live action bits suffer in terms of writing and realism, they just feel like a queasy SNL skit and never have enough weight. It’s non stop fun when the animation kicks in though, a slightly off-Disney style that stimulates the screen visually and pops with every colour combination you can imagine. My favourite has to be Laurence Fishburne as Thrax, the deadly virus attacking Frank’s nervous system, a gangly, evil eyed freak who sports purple dreadlocks, a contagious Freddy Krueger style index finger and enjoys his job a bit too much. William Shatner is great as sleazy Mayor Phlemming too. It’s not as much fun as stuff like InnerSpace, and the live action clashes with the animated world in places where it should seamlessly mesh, but it has one admirable quality in spades: imagination. The jokes and ideas within Frank’s body are hurled at you a mile a minute, and you’d need to watch it at least twice to catch every little barb and dad-joke worthy pun. Good times. 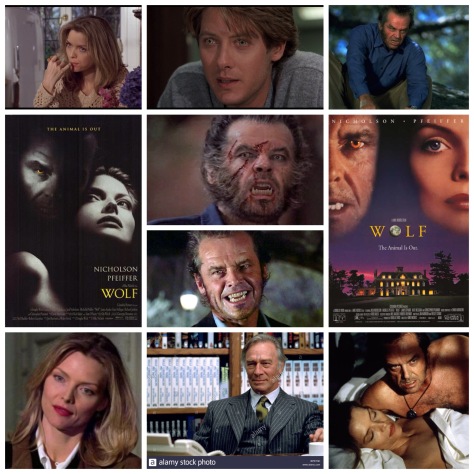 Mike Nichol’s Wolf cleverly combines comedic character study, spoofs the high profile business scene and whips it together with a far more literal lycanthropic horror story than I’d ever imagined before I watched it. It’s neat that dry metaphor went full on genuinely real monster flick, while losing none of it’s smarts along the way. Jack Nicholson, that old devil, plays an aging publisher whose livelihood is threatened by the arrival of a roguish young upstart (James Spader laying down that smarm) with designs on his job. It doesn’t help that he’s worn out, weary and not as sharp as he once was. Cue a werewolf mauling, which fixes those things right quick and turns him into a new man, in more ways than one. He’s fiercely competitive, virile and on the ball, but he also has to keep his hairy secret, well, a secret. Christopher Plummer is great as his fiery tempered boss, whose daughter (slinky Michelle Pfeiffer) begins to have eyes for the old dog, and the supporting cast has well coloured turns from Kate Nelligan, Ron Rifkin, Om Puri, David Hyde Pierce, Eileen Atkins, David Schwimmer and Richard Jenkins as a wily detective who begins to sniff the rat. The Wolf effects by Rick Baker and team are refreshingly old school, practical prosthetics and nice and gooey too. It’s also a tongue in cheek examination of male potency and territorial behaviour, so what better avenues of exploration than instinctual canine interaction and the politics of the workplace? Cool stuff, neat genre blending, a wicked cast and cool horror elements.

Guillermo Del Toro’s two Hellboy films are a wildly different pair, both incredible thrill rides and well worth anyone’s time, but I think I will always prefer the first. With the second he took the Pan’s Labyrinth approach, presenting a fairy tale world and showcasing makeup effects that were very similar to that film, an esoteric and elemental vibe. There’s just something about the Lovecraftian, steam punk WWII aesthetic of the first that works better for me, and seems to fit our red pigmented protagonist a little more. These films would be nothing without the essential and hard won casting of Ron Perlman, though. He brings a lively vitality, hulking physicality (he fits the part even before the prosthetics go on) and loveable sarcasm, and when you see him in action there is really no other actor you could envision bringing this character to life. It’s laughable to think that Del Toro fought the studio for years to get Ron in the role, turning down the likes of Vin Diesel and Nic Cage (what in the actual fuck were they thinking), not compromising for a second, knowing the film he wanted to make. Well, Ron got cast in the end, as we now know, and he’s not so much playing Hellboy, he just is Hellboy, he’s that perfect for the role. When he’s backed up by Del Toro’s near godlike creativity and imagination (the two partner on projects frequently and it’s genius every time), you get a piece of comic book escapism as exciting and adventurous as this. Hellboy was the result of a nazi experiment gone wrong, in which certifiable nut job Grigori Rasputin (freaky deaky Karel Roden) and his minions open a portal to a dark universe, in attempt to summon forth anything that could turn the tides of war (not the brightest idea, if you ask me), and instead out crawls infant Hellboy, a cranky crimson imp with a big stone appendage and an attitude to match. Kindly professor Trevor Broom (John Hurt) raises the creature to be a force of good and protection for our world, and soon enough he grows into eight foot tall, wise ass, cigar chomping, ass kicking Ron Perlman, now a valuable and formidable asset to the Bureau of Paranormal Research and Defense, an order who strives to keep the darkness at bay. Joined by his on and off flame Liz Sherman (pun intended, as she’s literally a firestarter), Professor Broom, rookie agent Meyers (Rupert Evans) and humanoid swamp thing Abraham Sapien (Doug Jones, dubbed out with David Hyde Pierce), he sets out to shield New York, the planet and the universe from Rasputin, who has returned with notions of finishing the cataclysmic work he started decades ago. The action is propulsive and rousing, initially in NYC streets and subway tunnels, and then in a far off arctic locale where a gateway to some dark dimension opens once more and a suspiciously Cthlhu esque deity of destruction peers out. Del Toro has stated before that he prefers to think of his work as ‘eye protein’ rather than eye candy. Well, call it what you will, his films are nothing short of dazzling on all levels, and Hellboy is no exception. There’s visual splendour in every frame, from the painstaking costumes, makeup and props (Perlman has a great big gun for that great big hand), to the production design and seamless computer wizardry, the world we see onscreen is immersive and entertaining for the entire journey. Roden makes a frothing madman out of Rasputin, always nailing the villain when he shows up, and stopping said show here with his theatrical and baroque insanity. My favourite has to be Kroenen though, a sharply dressed, mute nazi assassin with a face only a mother could love and a set of knives you’d be foolish to get in the way of. He’s an inspired and truly creepy villain that sets the apocalyptic dial on the highest setting when he shows up. Jeffrey Tambor provides additional comic relief as the long suffering suit who serves as the face of PR for the bureau, and props to Brian Steele as Sammael, a seriously pissed off demon set loose by Rasputin in the city streets, leading to one blockbuster of an action sequence. As far as comic book films go, this is a gold standard of filmmaking, world building and good old fashioned storytelling, all of which Del Toro is a master at. It wouldn’t have been the same without him, without Perlman and especially without the magic that happens when they work together.