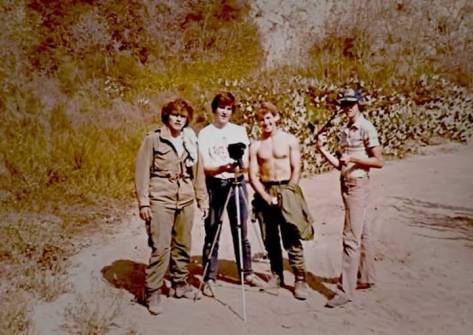 You should, dear listener, go away and read this article (SUNK) . . . before listening to this interview – simply for ‘those who came in late’ kinda reasons….

Films like Lost in La Mancha, Jodorowsky’s Dune, Lost Soul, and The Death of Superman Lives have ostensibly created a new documentary genre that I simply have been devouring … the ‘unmaking of’ movies … great movies that were stillborn, or that died slow miserable deaths on the path to cinematic folklore. And we’ve all heard the film fiasco war stories . . . but not like this. This is the most intriguing because it is still, for the most part…shrouded in a heavy belt of foggy mystery…. 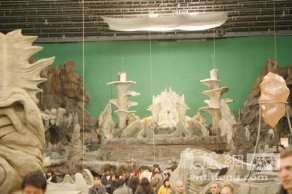 The, or one of the embattled figures at the center of this mesmerizing cyclone is a man I’ve longed to chat with since reading the aforementioned article, Mr. Jonathan Lawrence. Now, to get the winter of our discontent outta the way up front, I was certain – beyond a shadow of a doubt – that talking about the ‘FISH’ movie, (as Jonathan enlightened me, or as fate would have it as the movie’s surrogate title) was the last thing he would want to do . . . . AGAIN! 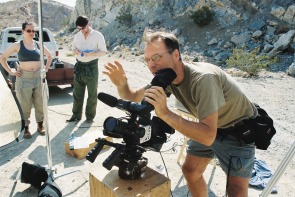 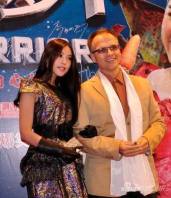 So, while I was certainly keen to devote only a small portion of the conversation to my simmering curiosity (namely EMPIRES OF THE DEEP) – I was more interested to hear the story of the man who was a part of its ill-fated inception….

In singularly one my most engrossing conversations I’ve ever had with a filmmaker – I have really wanted talk to ever since I read about a Chinese billionaire who woke up one day and decided he wanted to make a movie – with the whole story so feverishly well documented in the article back there at the beginning. . . and, Jonathan tells me he has been interviewed extensively for a possible documentary on the subject ……. fingers crossed!!! But, this conversation is not about that ‘FISH’ movie – instead it’s about the man behind it, also a candidate for one of the best lines I’ve heard …. “I know how to be dangerous, and get by.”

I love a good time travel film. There’s something so purely exciting about opening up your story’s narrative to the possibility, and once you do the potential is almost endless. From the mind stretching nature of paradoxically puzzling storylines to the sheer delight of seeing someone stranded in an era not their own and adjusting to the radical development, it’s a sub-genre that always has me first in line to buy tickets. Here are my personal top ten favourites: 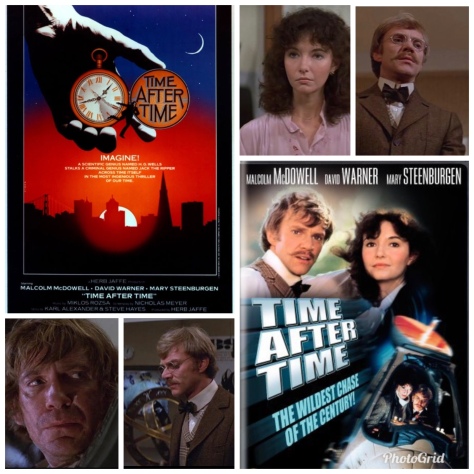 How’s this for a concept: H.G. Wells (Malcolm McDowell) chases Jack The Ripper (David Warner) around 1800’s London, through a time machine and all over 1970’s San Francisco. This is a brilliant little picture because as sensational as this high concept is, the filmmakers approach the story from a place of character and emotion rather than big style SciFi spectacle or action. McDowell plays Wells as a compassionate, non violent fellow while Warner’s Jack relishes in the ultra-violent nature of the time period. This is also the film where McDowell met Mary Steenburgen and shortly after they were married.

Time travel gets monopolized by the mafia in this stunning futuristic tale that is so specifically high concept it requires a near constant expository voiceover from Joseph Gordon Levitt so we can keep up. Playing an assassin hunting his future self (Bruce Willis), this has a vaguely steam punk feel to it, an uncommonly intelligent and surprisingly emotional script as well as scene stealing work from Emily Blunt, Pierce Gagnon, Paul Dano and a scruffy Jeff Daniels.

A young boy tags along on one hell of a epic adventure with a band of time travelling dwarves on the run from both the Devil (David Warner for the second time on this list, how nice) and God himself (Ralph Richardson). This is an exhilarating, lush example of what can be done with practical effects, from a giant walking out of the ocean to a Lego castle somewhere beyond time and space to a recreation of the Titanic. Not to mention the cast, which includes cameos from Gilliam’s Monty Python troupe regulars as well as Ian Holm, Shelley Duvall, Jim Broadbent and Sean Connery in several sly roles.

7. Robert Zemeckis’s Back To The Future

“Great Scott!!!!” Man, who doesn’t just love this film. It’s practically it’s own visual aesthetic these days, and spawned two fun sequels that couldn’t quite capture the enchantment found here. From scrappy antihero Marty McFly (Michael J. Fox) to demented genius Doc Brown (Christopher Lloyd) this just hits all the right notes and gets a little taboo in the process as we see what would happen if someone ended up in the past and got hit on by their own mom. Yikes! 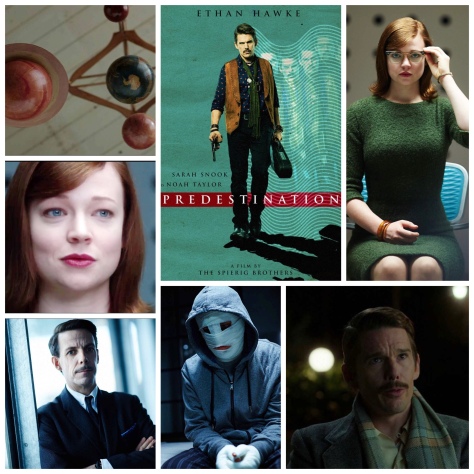 The less you know about this tantalizing, twisty flick going in the better, except to know that it will fuck your mind into submission with its narrative. Ethan Hawke plays a rogue temporal agent who’s been pursuing a relentless terrorist through time since he can remember, and finally has a plan he think will work to end the chase. Featuring Noah ‘exposition in every other SciFi film’ Taylor and the sensational new talent Sarah Snook, this is not one to miss and you’ll need a few viewings to appreciate it fully . 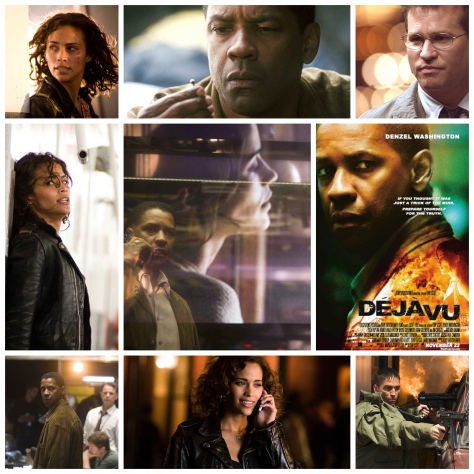 Scott’s trademark visual aesthetic blesses this kinetic, elliptical story of secret FBI technology used by keen ATF agent Denzel Washington to find and stop a mad bomber (Jim Caviesel) who has already slaughtered hundreds in a riverboat explosion. Adam Goldberg and Val Kilmer are welcome as agency tech experts but the real heart of this film lies in Washington’s relationship to a survivor of the incidents (Paula Patton) and how that plays into the fascinating central premise that doesn’t start *out* as actual time travel but gradually becomes apparent. 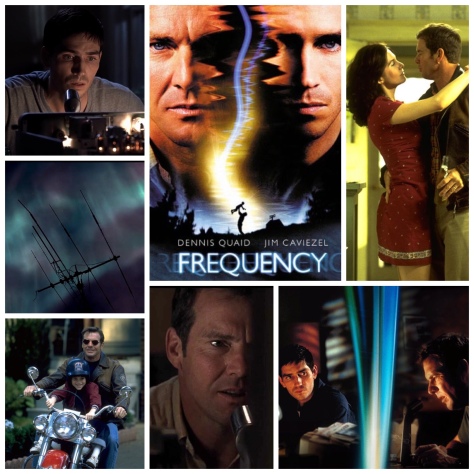 A father son relationship is the beating heart of this tale of cop Jim Caviesel (again!) and his firefighter dad Dennis Quaid. They are able to communicate across a thirty year gulf of time and the barriers of death itself via a miraculous HAM radio and some pseudo science involving the aurora borealis. This provides an exciting, involving and heartbreaking dual experience as the son races to find ways to save his dad from several different grim fates and take down a nasty serial killer while he’s at it. This film has aged so well mostly due to the genuine emotion felt between the family including mom Elizabeth Mitchell. The yearning to escape perimeters of linear time and reconnect with passed loved ones is especially prescient for me nowadays days based on my own recent experiences and as such the film holds extra weight now. A classic.

Artificial intelligence works out time travel for itself in Cameron’s ballistic gong show of an action classic that sees freedom fighter Michael Biehn, civilian turned survivor Linda Hamilton, homicidal cyborg Arnold Schwarzenegger and a few hundred short lived cops engaged in a bloody, brutal fight for the future. I picked this over the sequel because the notion of time travel in the saga overall feels freshest and most well worked out here, despite my love for T2 being just a smidge higher on the gauge. Perhaps it’s also because the excellent Biehn makes damn believable work of convincing us that he’s a weary, distraught soldier from a different era, and sells the concept with his beautiful performance.

Hazy, experimental, haunting and atmospheric, this was not a critical hit and it’s chilly vibe is evidence of that, but beneath that there’s a heartfelt story of confused gulf war vet Jack Starks (Adrien Brody) trying to make sense of his shattered psyche while surviving a gnarly mental institution run by a madman with a god complex (Kris Kristofferson). Somewhere along the way he discovers he can jump through time and uses the phenomena to investigate his own death and prevent others from happening. Featuring a low key, emotional turn from Keira Knightley and fantastic supporting work from Daniel Craig, Kelly Lynch and Jennifer Jason Leigh, this is a harrowing psychological thriller that gradually reveals itself as a meditation on life, death and the realms in between.

Gilliam gets two on this list, lucky him! He deserves it though, this is a curious film with unbelievable production design, a deeply felt performance from Bruce Willis and one from Brad Pitt that kind of defies description and erases doubts of his immense talent from anyone’s mind. Willis is a convict sent back in time from a bleak future to discover how and why a deadly virus wiped out most of earth’s population and sent the rest into subterranean caves. It’s not the film you’d expect and the sad, eerie resolution at the end is something that will stick with you for a long time.

Once again thanks for reading! There’s many that didn’t make the list as it’s tough to just pick ten, but I’d love to hear some of your favourite time travel films!