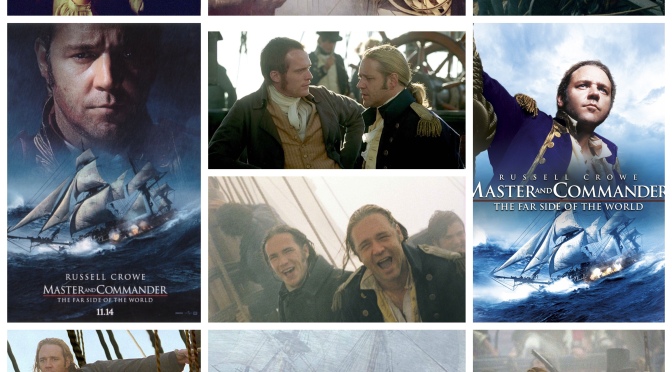 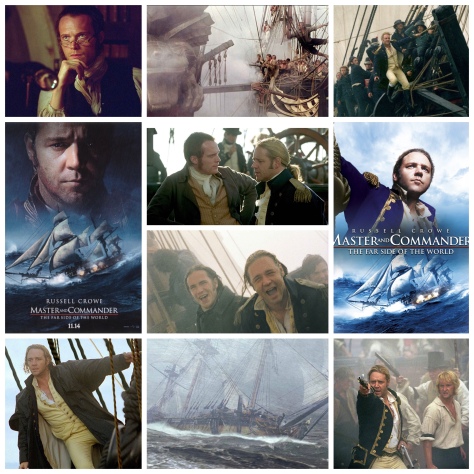 Many war films set in a different time period like to flaunt special effects, production design, pyrotechnics and swing their big budgets around like dicks, while somewhere in the commotion, things like character and story get lost. Peter Weir is one to intuitively avoid showboating and I was pleased to see that his Master & Commander: The Far Side Of The World is a beautiful piece that integrates technical wizardry with good writing and performance for something that feels rich, balanced and realistic.

Set during the Napoleonic wars surrounding South America, Russell Crowe is Captain Jack Aubrey, a Naval Commander tasked with taking his vessel and crew in hot pursuit of the French ship Acheron on a search and destroy mission that could turn the tide of the whole war. Acheron is a much quicker and stronger warship with more guns, but Jack is a cunning, headstrong and impossibly stubborn leader who won’t back down in the face of defeat, even though his crew sometimes shows signs of doubt. The central relationship of the film is between him and the ship’s surgeon Maturin, played by Paul Bettany. He’s a significantly less hard edged man and being Jack’s best friend might as well be first mate as well, but it’s interesting to see that despite a great love for one another, their natures clash. Jack is a pragmatic, no nonsense soldier when it comes to game time, yet has the soul for music duets and great dinner table stories when the guns are put away. Maturin is a would-be naturalist with no mind for the strategies of war who would rather spend his days exploring new species on the exotic Galápagos Islands. Their dynamic is ultimately what drives the film and they’re both fantastic but also supported by the likes of Billy Boyd, Robert Pugh, James D’Arcy and many others.

The film exceeds two hours in length but doesn’t feel like it because of how engaging Weir makes everything. There’s only two ship battles, a opening banger and a climactic peak and they’re brilliantly done but for me the real magic is watching Crowe, Bettany and the others interact and live life day by day on the vessel. The food is prepared in detail, the logistics of navy protocol are studiously shown and the dialogue paints a dense, rich history for all the men aboard, each having his own special part of the story to impart. Another thing Weir specializes in is not making his tales feel overly doom laden, angsty or depressing. Many of his films deal with dark, challenging settings and themes but there’s always this matter of fact, optimistic lens he looks through that is a signature for him and a winning attribute. Not to say that this is necessarily a rollicking swashbuckler, but there’s an affinity for compassion and the lighter side of human nature, despite it being a war film by definition. Huge shoutout to Weir’s go to cinematographer Russell Boyd too, who shoots the imagery so vividly and magically it almost looks like paintings from that era itself. Loved it.

Tim and Frank are back to discuss the latest Star Wars film, SOLO. 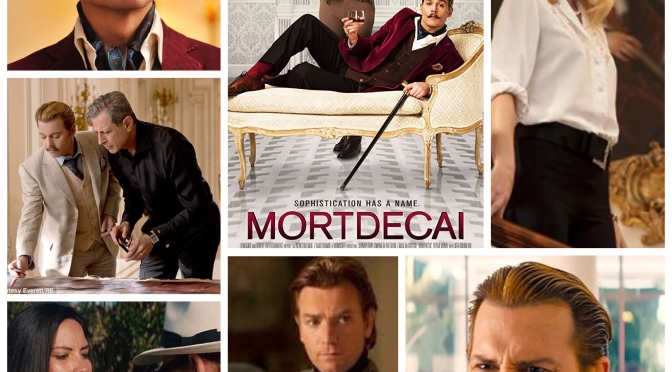 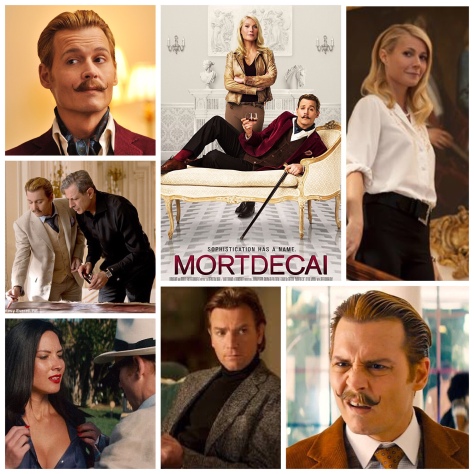 So… I don’t quite get… how this film ever got green-lit, aside from Johnny Depp pulling a few strings. It’s like the most unfunny, painful thing to see unfold, like a Pink Panther flick with all the wit, heart and humour sucked out of it by dementors, leaving nothing but an acrid, soulless shell. That may sound harsh, but give David Koepp’s Mortdechai a day in court yourself and you’ll probably have similar things to say of it, or worse. Depp plays the titular buffoon, an aristocratic, borderline senile art dealer with a plummy British accent and a silly moustache that becomes the butt of a tiresome running joke involving the gag reflex of his wife (Gwyneth Paltrow, barely even trying with her accent). Mortdechai becomes involved in some overwrought global art-hunt that makes little sense and drags on for an interminable length, with his trusty lusty manservant Jock Strapp, ha ha, (Paul Bettany miscast in a role better suited for someone like Jason Statham or Vinnie Jones). Ewan McGregor and his sunny disposition show up for a while as a detective with the hots for Paltrow, as well as Olivia Munn embarrassing herself in a role that’s well beneath her, and an unforgivably underused Jeff Goldblum, showing up so briefly that it’s a wonder he agreed to waste his time here at all. This is junk of the highest order, not even fit for vague background noise as one immediately just tunes into tallying up the many ways in which it blows. You’d think Depp would know better, but he’s still in the preening dress-up quagmire phase of his career that he hasn’t been able to wade out of yet. He tries hard here, but every effort waddles forth like a lame duck, every comic beat royally missed. Don’t bother. 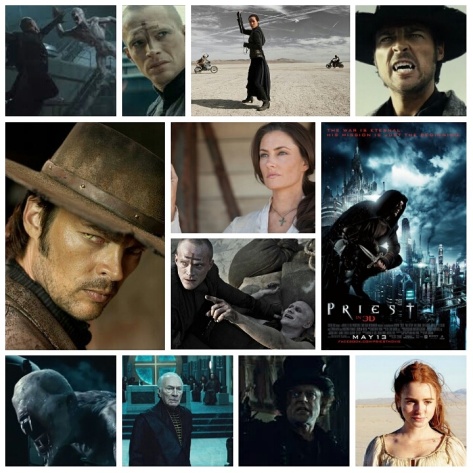 Priest is one of those flashy missed opportunities, a visually stimulating comic book flick that just couldn’t amp the substance metre up enough til it’s flush with style, and ultimately feels somewhat hollow. It’s still a gorgeous Blu Ray that will give your system a workout though, with some neat vampires and a great cast. Sometime in a murky post apocalyptic future, humanity lives in a giant gloomy city on the edge of oblivion, walled in for fear of vampires who have preyed upon them in the past. An order of warrior priests protects citizens and keeps order, until one rogue from their sect (Paul Bettany) discovers that the creatures may be back when an outsider couple (Stephen Moyer and Madchen Amick) have their daughter (Lily Collins) kidnapped from their desert dwelling outside the city. They come to Bettany for help, but the leader of his priesthood (a smug Christopher Plummer) is an obstinate son of a bitch and refuses to act. Bettany goes renegade along with Priestess (Maggie Q) and ventures into the wasteland to rescue Collins and fight these baddies. It’s frustrating because the look and design of this world is brilliant, like a dark opulant jewel that clearly has some thought put into it. But then… the dialogue and story are so numbingly pedestrian, straying not a kilometer into uncharted narrative waters to give us something even a little bit exciting or unpredictable. Quality jumps with Karl Urban’s dapper villain Black Hat, a vampire cowboy outlaw who oddly resembles what I’d imagine Stephen King’s Roland Deschain would look like if the powers that be took their heads out of their ass and recasted Idris Elba. But I digress. Like I said, terrific cast; Brad Dourif has a great cameo as a snide hustler peddling trinkets to superstitious townsfolk, and watch for  the great Alan Dale too. Bettany always makes for a solid action hero, he just has a bit of trouble finding the right projects (have you seen that turd Legion? Good lord) that deserve bis talents. This one falls just short. It could have really used a few rounds of defibrillation from another screenwriter, and perhaps a hard R rating to take advantage of the horror aspects. Still, the vampires are creepy enough (echoes of Blade II are always welcome), the actors keep it going and there’s no shortage of style. 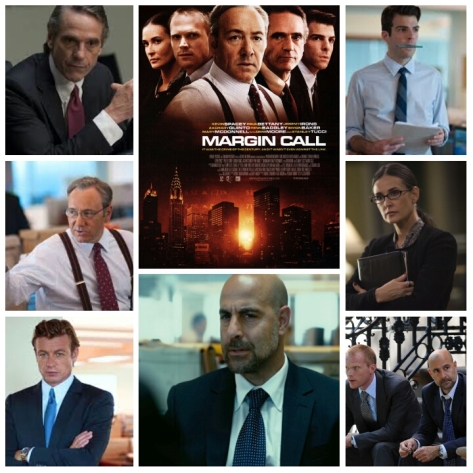 J.C. Chandor’s Margin Call sustains a laser focused, wilfully meticulous look at the days leading up to the 2008 financial crash, showing us life within one wall street office building during a nervy period which now no doubt is remembered as the calm before the storm. Various characters in different positions of the hierarchy anxiously brace themselves as the jobs begin to get cut and the dread looms towards them like the inevitable rising sun at dawn. It’s set all in one afternoon and night, compacting a far reaching event which spanned years into the microcosm of a single 24 hour window, a tactic which sits through the larger world implications and brings it in for something a little more intimate. Zachary Quinto plays a young trader who discovers a rip in the lining of the economic infrastructure, a precursor to the eventual disaste. I’m not being purposefully vague and cryptic with that, I just don’t personally understand all the exact ins and outs of what went wrong back then, and having not the slightest knowledge of wall street jargon, that’s the best I can do. He brings this knowledge to his superiors who react in varying ways. Kevin Spacey is a disillusioned big shot who sees his life going off the rails alongside the country’s market, and mopes in his swanky office. Paul Bettany is a cocky young upstart who uses casual indifference to shade the bruises he’s got from knowing what will happen. Demi Moore is a company head who looks out for herself while others in the company. Jeremy Irons provides scant moments of humour as a bigwig fixer who arrives on a chopper to set things straight, or at least assess the damage. The best work of the film comes from Stanley Tucci (surprise, surprise) as a jilted employee who has been laid off in the confusion, and is seething about it. His melancholic monologue about what it takes to propel America’s industry and economy forward resonates with a humanity that cuts deep. The film ticks along with a pace that’s both measured and swift, with little time for introspect, yet showing it to us anyway amid the chaos. Watch for appearances from Penn Badgley, Al Sapienza, Simon Baker and Mary McDonnell as well. Chandor let’s the proceedings thrum with an inevitability that hangs in the air as the promise of the impending crisis, a feeling that serves to impart not why it happened, not how it happened, but the fact that it did happen, to each and every individual person who was affected, as opposed to the country as a whole.