C. Courtney Joyner is a successful writer/director/novelist. He was a zombie in a Romero movie, he hangs out with L.Q. Jones and Tim Thomerson, he was once roommates with Renny Harlin and made the breakfasts while Harlin got the girls. It makes me think of Steve Coogan’s line from Ruby Sparks, “how do I go back in time and be him.”

Truth is we are the same in many instances. We’re just on different sides of the globe and one of us is in the big leagues while the other is at the scratch and sniff end of the business. But we both love movies and fantastic adventures. We both wrote to the filmmakers we loved long before the director became celebrity. We both longed for more info from behind the scenes – long before such material was in abundance.

He grew up in Pittsburgh, the son of a doctor and a reporter. He came of age in the glory days of monster movies and adventure fiction. Then he headed west and after college it wasn’t long before his writing caught the attention of producers and thus a career was spawned.

Spending those early years working with Charles Band and his company, Empire, Joyner was prolific, and soon the writer became a director. All the while he was working on a dream project, a work we all have in us, that he was fighting to bring into the light.

It was a love of Jules Verne and the “what if” type scenario that gave birth to the early version of the story that would become his current masterwork Nemo Rising; a long-awaited sequel, if you will, to 20,000 Leagues under the Sea.

His story would go through several incarnations before finally reaching the form into which it has now solidified. Swirling around him were big blockbuster versions which never quite surfaced. Names like Fincher and Singer and stars like Will Smith were linked to these big dollar deals.

Unfortunately even Joyner’s long-form TV version came close, but didn’t get handed a cigar. So at a friend’s insistence he wrote the book and his publisher, in spite of the property being linked at that time to a screen version that fell apart, agreed to still put the book out.

Thus Joyner’s Nemo has risen and at last we can, for now, revel in it’s existence. I believe it is only a matter of time before it shall acquire enough interest – and the new major playing field – the field of series television may yet be the staging ground for Courtney’s long-suffering tribute to the genius of Verne and the thrilling enigma of a character known as Captain Nemo. 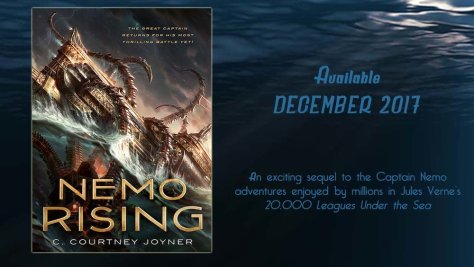 Long have I waited to chat with him and it was well worth the wait. So, here now I present my interview with the man that director Richard Lester (The Three Musketeers, Robin and Marion, Superman II)  once mistook for a girl that was eagerly interested in film.

2015 was the year. I was in Brisbane, Queensland, Australia at our version of San Diego’s Comic Con: SuperNova. I was there peddling my books but, in the booth next to mine, something amazing was afoot. 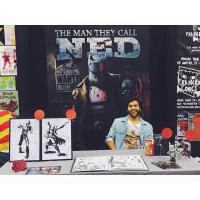 A giant banner held the image of the famous, or perhaps infamous Australian bush-ranger Ned Kelly; transformed and repackaged as vigilante, looking battle-damaged and bad-ass holding the severed head of a zombie in one hand and a loaded pistol in the other. 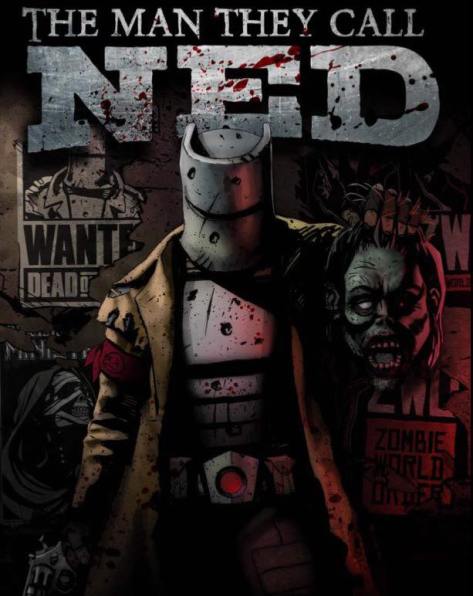 That image invoked more than history and cultural iconography. It spoke to me as a concept so simple, yet compellingly cinematic. He is one of our country’s most treasured pieces from the past in a fresh guise and pitted against a dark, futuristic dystopia where the undead have evolved and formed a society in which humanity is not only a minority, but is being systematically wiped out. 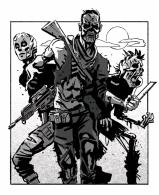 Max Myint leads the creative team, spearheading, if you will, the rise of this epic saga of the man called Ned. A talented writer, sculptor and world-builder, the gutsy, gritty dark realm that he has helped usher in is about to explode on November 10. In the midst of the stench of rotting flesh and the searing of metal is something that commands attention. I for one can’t wait to see Ned’s rise and rise continue, and Max and his talented team blast this thing out into the masses . . . and watch it catch fire.

The living have surrendered…

Except for one man…

They call him Ned! 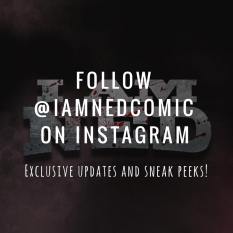 The true poetry of the macabre requires the thorough perusing of a far out cosmic language, a séance to effectively make contact with the phantasms inherent in our reality that have over time inspired the ones we see in literature or on the screen. Horror films often make for the most compelling alchemic excursions because they dance so closely with such demons, unafraid to create friction in order to exorcise them. These are our nightmares. They don’t always make sense, and they don’t only come at night. Yet, they are undoubtedly a significant part of what makes up our very being. A man devoid of fear – especially that which he does not openly discuss in some fashion – is not one worth trusting.

Some of the most subtextually rich and socially redemptive genre cinema can be exhumed from the 1970’s – a time when the aftermath of the Vietnam War left our world at large, and more specifically America, with spectacularly apocalyptic imagery – and one of the most coveted gems to rise from that particular pile of ashes is MESSIAH OF EVIL, a truly terrifying take on the undead from the scribes behind INDIANA JONES AND THE TEMPLE OF DOOM and AMERICAN GRAFFITI (among others), Willard Huyck and Gloria Katz. This is the kind of stuff you might put on for “easy late night viewing” but will soon regret doing so as there’s nothing “easy” about the film’s approach to otherworldly dread.

Beautiful, young Arletty (Marianna Hill) arrives at the coastal resort town of Point Dune in search of her father Joseph Lang (Royal Dano), an artist with whom she has lost contact over the years. Although he is nowhere to be found when she arrives, his house – its walls adorned with paintings of strange shadow people – is open and Arletty decides to continue her search the next morning. This leads her to a trio of drifters shacking up in one of the local motels who are listening intently to an old boozer (Elisha Cook Jr.) babbling on about some mad local tale when she finds them, and who appear to be dysfunctional company to say the least.

The three nevertheless follow Arletty back to her father’s estate and make themselves at home, with their suave male leader Thom (Michael Greer) seducing her soon after, to the disapproval of his female companions. Only when Laura (Anitra Ford) splits and heads into town – where she is picked up by a creepy albino man in a red truck with a penchant for eating live beach rats – is the sinister nature of Point Dune made somewhat clear. Without spoiling too much, lack of hospitality is hardly scratching the surface. It would be in one’s best interest to not wait around too long for all of the answers; some simply don’t come.

What follows after a spectacular sequence set in a mostly desolate supermarket is a series of individually compelling moments, such as a clever riff on Hitchcock’s THE BIRDS involving Thom’s other companion Toni (Joy Bang) in a movie theater and another where Arletty’s father returns only to attack her. The townspeople are seen gathering at the beach during the witching hour to stand by campfire, staring up at the moon, and the first sign of warning when Arletty first arrives in town is an attendant at a gas station shooting off into the night at some unseen entity(his response is truly spine-chilling: “Dogs…stray dogs. Has to be. Has to be dogs.”); from the get-go, there’s something not quite right about Point Dune, and everyone seems to be harboring some kind of secret. How else would one sustain such a sparse – though in this context, rather convenient – narrative?

Huyck and Katz took more than few pages from a certain Howard Philips Lovecraft’s book for their very own cinematic creation, which comes off kind of like the late author’s THE SHADOW OVER INNSMOUTH on acid. Joseph Lang’s bizarre diaries, in which he speaks of a strange affliction that has befallen him as of late, and will soon begin to affect Arletty as well, may explain what’s going on along the coast; it’s an effective device that is unfortunately posited alongside by Arletty’s own voiceovers, which for the most part don’t benefit the storytelling. Nevertheless, the soundscape is consistently intriguing – for the most part, this feels like it was scored and lensed in another dimension entirely. Then there’s the cinematography from Gloria’s brother, Stephen Katz, who went on to lens a little movie called THE BLUES BROTHERS; absolutely spellbinding stuff, and arguably what makes the film. Both scribes were fresh out of film school when they made their demented debut, and as such, they were more inspired by European art-house than anything else; and it shows. The colorful widescreen compositions bring to mind the likes of Mario Bava, and even Hammer’s own Terence Fisher, with touches of Godard and Antonioni.

The filmmakers utilize the disturbing paintings inside Joseph Long’s house well, with the silhouettes always hanging over the various characters as they occupy its many hallways and bedrooms, giving off the impression that nowhere is truly safe.  It may be one of the most visually ravishing of all American horror films. Willard, interviewed in Stephen Thrower’s great book NIGHTMARE USA, has gone on record saying that MESSIAH OF EVIL was intended to be his vision of Los Angeles as he saw it after hours. In this case, it’s a rather bleak but no less phantasmagorical one; not a land of opportunity but one that carries with it the putrid stench of death, one that is (for lack of better word) haunted. Many of the undead extras were unemployed aerospace workers at the time and as members of a tightly-knit community they seem to wander around tragically, aimless – but no less capable of acting on their carnal, cannibalistic urges.

Ultimately, this is genuinely exquisite, though imperfect; there’s room for improvement in the casting department, with some dialogue coming off as rather stilted and less than subtle, the edges are overall kind of rough in spite of the sheer grandeur which they contain, and the electronic score – while mostly in service of the weird atmosphere – is often distracting during key scenes which could have benefited from a little more silence. Still, this is one of the most consistently creepy, thoroughly intoxicating and rewarding genre outings of its time; Lovecraft adaptations are admittedly a mixed bag, but by evoking shades rather than drawing directly from the author, Huyck and Katz have made (somewhat unintentionally) one of the best in the lot. It’s like entering another world entirely. Surrender is essential, adoration is an option; they’re coming here, they’re waiting at the edge of the city, they’re peering into windows at night, and they’re waiting. No one will hear you scream.